In September 2014 Tango Extremo is coming up with a new exciting project:Havana.

The orchestra has been influenced by the wonderful music of South American port cities of the thirties. Think about music as danzón and tango that was played in the beautiful Cuban and Argentinian milonga’s. The group will perform a blend of music from La Habana and Buenos Aires in theaters and concert halls in the Netherlands. Especially for this occasion Tango Extremo added a percussionist to the band, the legendary Gerardo Rosales from Venezuela. 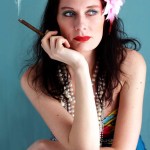